The Data for Governance Hackathon was envisioned to challenge participants to build an integrated analytics platform that will consolidate various disparate data sources to create a unified ‘analytical view’. With this view, independent entities will be analysed for patterns, relationships, commonalities, and triangulated insights generation to drive data-driven strategic decision-making on governance at various levels.

Our platform was designed to serve as a ‘single version of the truth’ for data across all different (public and private) sectors – health, education, financial services, agriculture, etc.  However, given the size and scale of an overarching such data project, we decided to create a proof of concept demonstrated in form of a minimum viable product (MVP) using all the data set captured from the GRID platform.

Our objective is to drive the synthetic use of data by expanding the visualization component of the GRID3. This will help the policymakers understand the distribution, patterns, and peculiarities among different segments of the populace at National, state and local government levels.

Our submission involves the implementation of standardized analytics dashboards that will provide visualizations and visibility, especially in regards to how advanced data analytics can enrich data governance at various levels. We explored the possibilities of integrating a diverse set of public data such as population estimate from GRID3 (Geo-Referenced Infrastructure and Demographic Data for Development) project, locations of hospitals, schools and market places in a bid to understand how these distributions affect governance. The granularity of these datasets from disparate sources were provided at local government level. The LGA granular detail enhanced the ability to correlate and implement referential integrity within the data sources.

The overall aim was to draw deeper contextual insights and use the insights generated to offer bespoke solutions. The platform created, made data more discoverable, accessible, interoperable and reusable for industry stakeholders and interested parties. It was envisioned that the platform would grow to include additional domains such as agriculture, education, health, transportation, logistics, etc. in the later years. This document provided comprehensive documentation to explain the objective of the MVP and to demonstrate a new way of using dynamic analytic tools to analyse multiple data to present insights. This document explained the nature of the data sets provided, system architecture, tools and technologies, use-cases, and data governance framework adopted.

GRID3 data provided population estimate at LGA level by combining micro-census / survey data with satellite imagery to predict population numbers in accessible areas. Model-based gridded estimates of Nigeria population density along with other information was used to determine a metric’s penetration at LGA level. Aggregating the penetration at LGA, state, regional and national levels provided a hierarchical view and deeper insights to the extent at which individuals at these locations.  GRID3 hybrid census was mainly estimates based on survey and geo-spatial data. GRID3 tables had states, LGA, age-band, gender and population estimate.

The GRID3 team provided additional data set that enriched the insights generated from the supply-side data. These include:

The data provided included the GPS coordinates, LGA, States etc. of these facilities. The list of fields provided is as listed below.

Largely, the data provided was clean, especially, the transactional data sets. However, there were cases of data mismatch, where a local government expected to be in Lagos (say Surulere) was found in Imo state.   These cases constituted less than 2% of the entire data set. We curated the data by conducting a preliminary data quality assessment to ascertain the level of inconsistencies in the data. Some efforts taken to curate the data involved creating a lookup table which served as a reference point for the correct mappings of local government and states in the Federation.

The data quality process ensured that key steps were fulfilled prior to processing, analysis and visualisation of results based on a number of quality criteria:

Use Case 1: Comparison of Population Distribution across

Use Case 2: Multi-Dimension Layers of Measure over Base Population 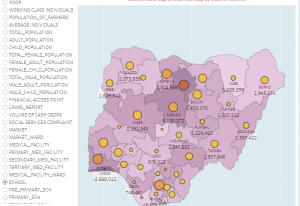 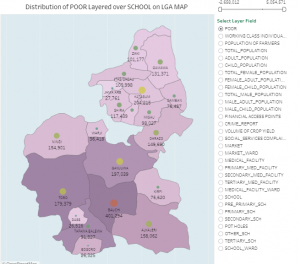 In a common parlance, Big data analytics is the often complex process of examining large and varied data sets, or big data, to uncover information — such as hidden patterns, unknown correlations, market trends and customer preferences — that can help organizations make informed business decisions. The practice of Data Analytics has gradually evolved and broadened […]

KPMG in conjunction with Data Science Nigeria organized a business analytics hackathon where I was adjudged to have the best submission. Follow the link to the idea behind my 32-page submission. Firstly, my perspective on Data Science is storytelling. Your customers give you some data (Big, Small, Structured and/or Unstructured) with some brief, your job […]

Fill the form below carefully to signup for our training session. Our team would get back to you as soon as possible to confirm your seat and proceed with payment details.

Human Resource analytics is a data-driven approach to managing people at work. Business leaders can now make decisions about their people based on deep analysis of data rather than the traditional methods of personal relationships, decision making based on experience, and risk avoidance.

In this course, participants will explore the state-of-the-art techniques used to recruit and retain great people, and demonstrate how these techniques are used at cutting-edge companies.

This course is designed to impact the way Sales Managers and Salesforce think about transforming data into better decisions. Improvements in data-collecting technologies have changed the way firms make informed and effective business decisions. The course on Sales Analytics, focuses on how sales team use data to profitably match supply with demand in various business settings. In this course, you will learn how to model future demand uncertainties and how to predict sales.

What you learn in this course will give you a strong foundation in all the areas that support analytics and will help you to better position yourself for success within your organization. You’ll develop skills and a perspective that will make you more productive faster and allow you to become a valuable asset to your organization.